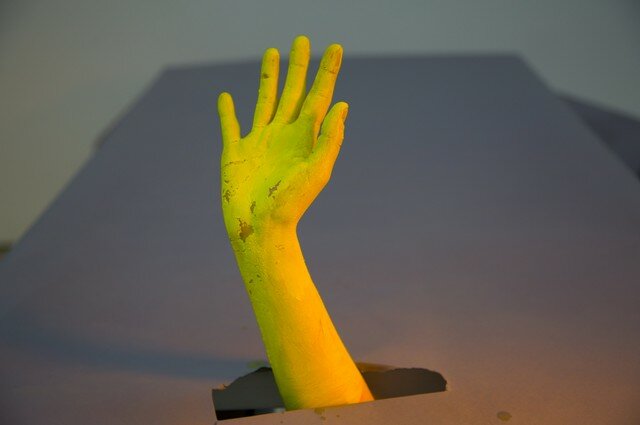 Anxiety 2014 Film discovers the bodies, shapes, objects and forms that have represented anxiety throughout cinema history. They are recognisable figures, and frequently stereotyped – the madman, the melancholy migrant, the hysterical housewife, the violent youth – that over time have strangely and stubbornly persisted in our cultural imaginations. They are also the non-human: the environmental threat, the knife, animals, even aliens from outer space.

Anxiety 2014 Film puts these anxious cinematic figures ‘in place’ not only to understand what they represent and can tell us about a history of our shared anxious fears – both personal and social; what we can learn of anxiety’s ‘character’ as well as its causes – but also who has had to bear the weight of those anxieties and to what personal and social cost.

Anxiety 2014 Film is a narrative programme that tells a story of anxiety from a myriad of perspectives through six strands: Fear of Fear, Shock and Awe, Anxious Animals. Future Perfect, Un-Homely and Snap.

Anxiety 2014 Visual Arts explores the flexible and often contested boundaries between sanity and insanity, centre and margins, visibility and invisibility. By looking at the social and cultural anxieties associated with those boundaries and other ways of classifying individual and collective experiences, it aims to shed light on the complexity and prevalence of anxiety in contemporary society.

New commissions and existing works including exhibitions, performances, residencies and talks, reflect a variety of critical approaches to what is considered to be normal and the associated pressure of fitting one’s subjective experiences within this frame. The projects also seek to enact processes of resistance and the liberating – if often unsettling – potential of unconstrained self-expression.

The programme has a special focus on interdisciplinary and socially- engaged art practices, involving professionals and communities from different backgrounds, promoting creativity and social interaction.

Anxiety 2014 Communities explores anxiety by engaging with our understanding of where ‘community’ starts and ends. We have co-curated participatory arts programmes to challenge engrained stereotypes that lead to mental health stigma and discrimination – and the isolation of ‘out of sight and often out of mind’ communities.

Hands-on creative collaborations involving hospital out patients, men from Brixton Prison and people with lived experience of mental health issues are central to the programme. We have worked with arts institutions in collaboration with NHS mental health services and community organisations. By working with artists alongside health care professionals we aim to inspire and create new ways of promoting health, wellbeing and a sense of belonging.

You are invited to engage with your own sense of ‘community’ as you explore the commonalities and differences that are part of the fabric of London.

Anxiety 2014 On Stage explores anxiety through music, the voice, spoken word and comedy. We present a wide range of performances aimed at attracting diverse audiences at the Wigmore Hall in Central London and the Albany Deptford.

We are pleased to work with the Wigmore Hall on the Anxiety and Modernity concert series featuring our highlight festival commission of Jocelyn Pook’s Anxiety Fanfare and Variations for Voices. The Anxiety and Modernity concert series looks back at the early modern music of the twentieth century and how the anxious social and political climate that prevailed during the inter-war period inspired a revolution in music. Education events will inform audiences about why early modern music has such a close relationship with anxiety and explore contemporary concerns with conditions such as performance anxiety. There will also be a special relaxed performance for those living with dementia and their carers.

We are delighted to work in collaboration with the Albany Deptford to organise a diverse performing arts programme that addresses contemporary concerns and responses to anxiety from all ages and cultural backgrounds. Based at Albany Theatre and the Deptford Lounge, the week-long performing arts programme features a number of shows that tackle different aspects of everyday life and the role of performance in wellbeing: from ageing and our relationship to professional carers, to how poetry and live art events can inspire recovery and self-knowledge.